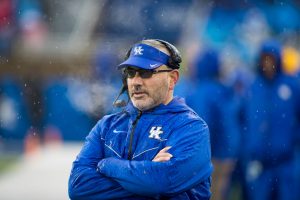 My guest today on this Football Conversation is the Special Teams Analyst of the Kentucky Wildcats, Coach Louie Matsakis. Louie has had a successful career focusing on the third of the game that is responsible for the most explosive plays in every football game.

He grew up in Shadyside, Ohio, and played college football at Emporia State University. Once getting into coaching, Louie has been an integral part of football programs at various levels from D3, FCS, and BCS programs.

Learning from NFL Special Teams Coaches: I think it helped tremendously, a lot of the detail is involved in the NFL. It is a lot different than if you talk to guys who have been career college guys. I mean, NFL guys are working on, their stance, the weight distribution, hand placement, a six-inch first step in certain instances, things that when you talk to guys who have only been in college, they usually don’t get into that much detail. I also enjoyed learning how to create different drills so that we can drill down the key coaching points that they do in the NFL and the breakdown of opponents is at a different level.

Working for Charlie Weis: He called me and wanted me to be the Director of Player Personnel while also working with special teams in an analyst-type role. So I got to go back and learn how they did it in the NFL with the Patriots. We ran it all like the NFL in terms of evaluations and grading scales and taking emotion out of recruiting and just truly finding the right fit for our schemes.