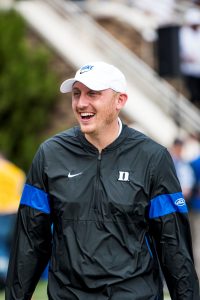 Rising Star on the Coaching Carousel

My guest today on this football conversation is Mitch Singler. When I first got into college coaching at Kansas State as a GA in 1988, I lived with two guys: Dave Flegal and Bill Singler. Little did I know, that 34 years later the son of Coach Bill Singler would be on my show as one of the rising stars in this coaching profession.

Mitch has risen through the coaching ranks after playing receiver at Oregon State University. He went on to work at his alma mater for Mike Riley and Gary Anderson until taking a leap of faith with his wife, Janae to join the staff at Duke University with David Cutcliffe.

After much success at Duke. Coach Cutcliffe retired and his staff was left to find their own paths navigating the coaching carousel. In this episode, Mitch shares with us the trials and tribulations of his coaching journey as well as what has influenced him in the profession.

UPDATE: Shortly after this episode, Mitch got his next coaching position in the NFL with the Las Vegas Raiders!

Coach Mike Riley: After every season, we sat down and had an exit interview. One of the final questions he always brought up was, what do you want to do with the rest of your life? And like you just said, my dad was the head coach at South Medford High School. I just saw the impact and the influence he had on my teammates, and the kids around the high school. And that really hit me in terms of what I wanted to do with the rest of my life, because I saw my dad and I saw it firsthand, I lived it.

Transitions in Coaching: In my first year of coaching, there’s already a coaching change. Your eyes open up, and you’re like, oh my gosh, like I’m really getting into the coaching world. Well, two and a half, three years later, another coaching change happens. And just like that, you’re sitting there, I’m a young coach, just getting into the game. And here I go through another transition at the same school.

Getting the next coaching position: I just rely on the coaches I’ve worked under. And if anything came up I always approach them with, “Hey, Coach, here’s an opportunity that I saw. Is there a connection there? Do you know them? Have you worked with them? From there we start to connect the dots. Sometimes you get lucky…