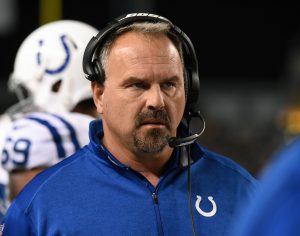 This episode today is all about one man’s journey from playing high school ball in Pennsylvania to becoming an All-American in college which led to a lengthy career in the NFL playing for some legendary coaches that influenced his coaching career.

My guest today on this football conversation is Coach Greg Manusky. Greg played ball at Dallas High School and then at Colgate University before embarking on a 12-year career in the NFL playing for Joe Gibbs, Denny Green, and Marty Schottenheimer.

Greg’s coaching career began as a linebacker coach with the Washington Redskins and he became a successful DC at San Francisco, San Diego, Indianapolis as well as Washington. Currently, he is working with Brad White at the University of Kentucky in a quality control role with the vaunted Kentucky Wildcat Defense.

One more interesting note… Greg has the distinction of being named on the 2001 All-Madden team and I am sure you will see why in this episode.

Family & dealing with moves in the NFL: It was two days ago. One of the coaches came up and we were sitting and talking and he goes, How many times have you moved? I said “moved” probably about 20. In the NFL  it stands for “not for long” and it affects the family for sure. I have a beautiful, outstanding wife and she’s basically a single mom during the season. She understands the football business.

What’s next? Well, it isn’t the next chapter for me, I don’t want to DC anymore. I mean, from my standpoint, it’s a lot. It’s a lot of stress. You know, and I’ve done it for 12 seasons or so. I don’t even know how many years but it was fun doing it at the time. I just want to get a group of young individuals preferably in the NFL and try to coach up outside inside linebackers.

UPDATE: Just after this interview, Greg took on his next challenge coaching in the NFL with the Minnesota Vikings!